Pretty awesome:
Why engineers and the public love Umhlanga’s pier

September 7, 2020 | Umhlanga Tourism | Comments Off on Pretty awesome:
Why engineers and the public love Umhlanga’s pier 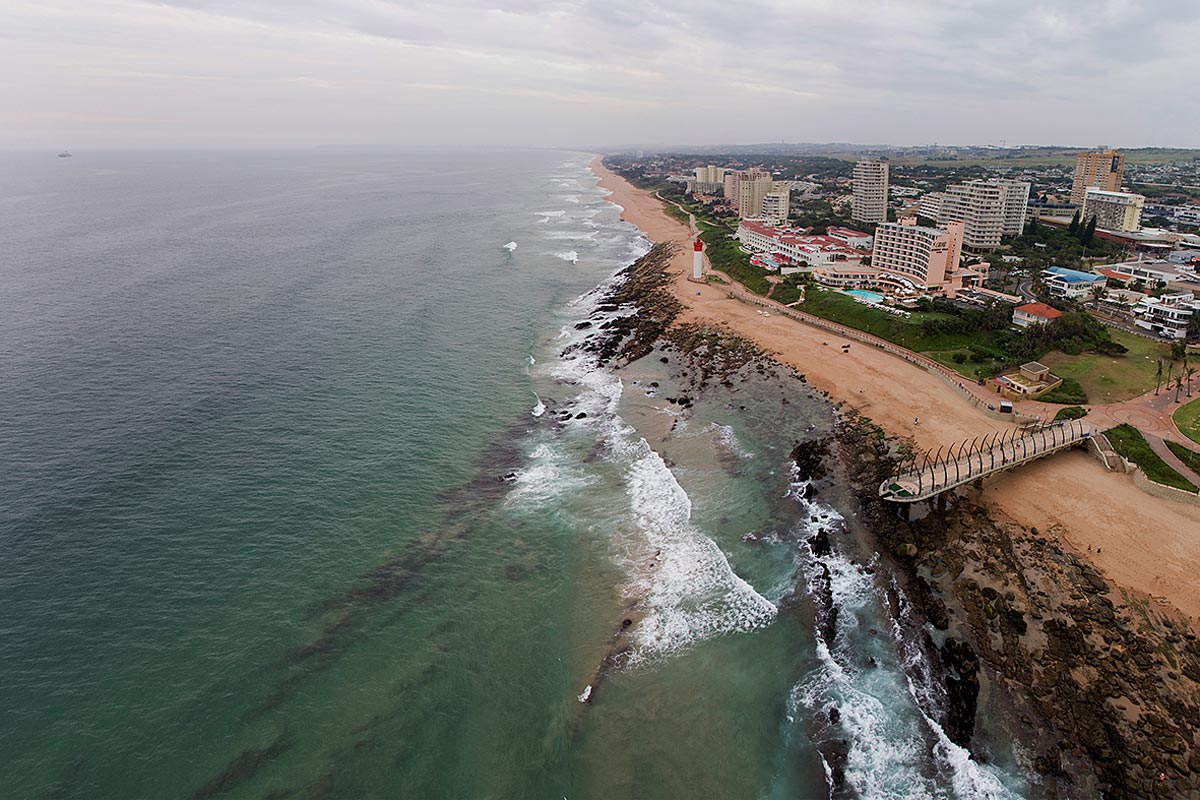 In the previous blog , we looked at some of the smart thinking that went into Umhlanga’s whale-bone pier. Here we continue the tour and tell how the builders battled the elements to finish on time.

Unlike many of the piers on Durban’s beaches, the whale-bone pier rests on only six widely-spaced columns. This gives beachgoers plenty of room to pass or play beneath.

Beams atop the columns and rib elements wrap around under the trough, extending up to the deck, to stiffen the construction.

At the deck ends of these, Duvenage anchored 16 pairs of masts.

Most of us now refer to the mast as the whale-bones, but the architect said it was not as specific as that initially. He was riffing on a nautical theme and had to mind the carcass of some sea creature.

They arch upwards and inward to give the pier another dimension. And they get taller and come closer to touching at their tips, from the base of the pier to its end.

G7 Technology moulded the hollow masts-whale-bones in glass reinforced polyester, which makes them strong and light.

They are also able to withstand the harsh marine environment, which punishes even stainless steel and rusts steel reinforced concrete from the inside out. On that score, the pier has galvanised reinforcing to lengthen its life.

A powdered metal pigment (touched up here and there with a splodge of  paint) gives the whale bones their greeny-bronze hue. It mimics the verdigris you find on weathered copper.

Keeping costs within budget is always a concern with projects. Here Duvenage, drawing on experience designing decorative elements for Durban’s uShaka Marine World theme park, came up with a plan.

The same basic mould made all the masts, with extensions bolted on for the longer ones. The ribs on the north and south sides of the pier are identical, but flipped around.

The stanchions were made from reinforced polymer concrete and the handrails from extruded glass reinforced plastic.

“Prototypes of the stanchions found to be inadequate were improved. And the installed stanchions have performed well since being installed in 2007,” said Duvenage.

The pedestrian and decorative lighting, designed by Rob Anderson, use efficient LED technology – at the time new in such applications.

Duvenage helps the municipality with repairs, from time to time.

He was now looking for an artist to remake some of the specially-coloured ceramic tiles used in the attractive mosaics that decorate the platform, where they have cracked.

Duvenage was modest about the pier, but pleased people found it accessible, especially wheelchair users.

“It does what it’s supposed to. It discharges just far enough for the wave action to take the discharge away from the shore,” he said.

The Durban branch of the South African Institute of Civil Engineering was more effusive. It presented the pier team with an award for technical excellence in June 2007.

In the following year, the pier received the Institute of Municipal Engineering in South Africa/Consulting Engineers of South Africa national award in the structures and buildings category.

In 2014, travel writer and social media influencer Tamara Hinson put the whale-bone wonder at the top of a list she prepared for CNN.

The success of it all tickles Godfrey Vella, who managed the project for the municipality.

Vella, a senior manager with the eThekwini Engineering Unit’s Coastal Stormwater & Catchment Management Department, told Umhlanga Tourism there had initially been a “little resistance” from some hoteliers and others, who questioned the need for change.

He likened it to the position some have taken in more recent times to a proposal to build a tidal pool between the pier and the lighthouse. The project was off the agenda for the moment.

Vella welcomed what had been “quite a change of attitude” to the pier.

“Now the people of Umhlanga have taken great ownership of the pier. And it’s an icon,” he said.

Apart from requests to use it for wedding photo-shoots and a car launch, he recalled a cancer awareness event which wrapped the masts in pink.

He was happy the pier was looked after and loved. Security from the Umhlanga Urban Improvement Precinct had helped nip vandalism in the bud.

Any memories of difficulties during the construction work, which began in 2006 and finished the following year?

“There was a challenge at the end, casting the bases into the rocks.

“You had to dig out a base in the rock at low tide; break out the rock and prepare base for casting concrete and then come back later and do shuttering.

“Towards the end we encountered some bad weather. In hindsight, why did we not cast all the bases at the same time?”

But as the poet reminds us, There is a tide in the affairs of men / Which, taken at the flood, leads on to fortune.

“We increased the resources to finish on time,” said Vella.

Posted in Outdoors, Umhlanga General, Umhlanga Rocks - Things to do